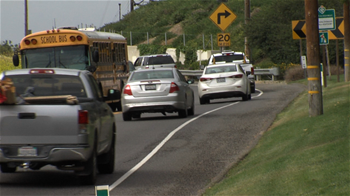 Carbon Canyon Road, also known as State Route 142, is under the jurisdiction of the California Department of Transportation and spans across two counties, San Bernardino and Orange Counties. State Route 142 is often used as a commuter thoroughfare. The segment through Carbon Canyon is approximately 8.4 miles from Chino Hills to Brea, and is maintained by two separate Caltrans Districts, District 12 (Orange County) on the Brea side to the County Line and District 8 (San Bernardino County) on the Chino Hills side to the County line.

An increase in the volume of truck and passenger vehicle traffic over the last several years has resulted in major traffic delays and safety concerns during peak traffic hours. The congestion causes significant delays for residents who live in Carbon Canyon neighborhoods as well as other areas of the City which intersect with this roadway. This congestion is further amplified when the local freeways, SR-57, SR-60, SR-71, and SR-91 become backlogged. The following are likely factors that have contributed to the sub-standard conditions of Carbon Canyon Road:

The solution is rather complex and requires the coordination and support of the following agencies:

In October 2016, City staff began the effort to identify a solution by meeting with Caltrans District 8 officials and staff from the City of Brea. The meetings shed some light on the monumental challenges of increased traffic volumes, delays, safety issues, and truck traffic on Carbon Canyon Road. One of the first significant tasks undertaken was the initiation and completion of an initial (Phase 1) traffic study funded by the City of Chino Hills.

Phase 1 Traffic Study Completed
As a result of the collaboration between the various agencies, the City of Chino Hills took the lead and retained a transportation engineering consultant to prepare an initial traffic study for the Carbon Canyon corridor. The objective of this study was to provide overall background information and recommendations on what steps to take to address the traffic issues along Carbon Canyon Road and, in particular, the large-truck traffic concerns. The consultant completed the initial study in March of 2017. The study was then submitted and reviewed by the City of Brea, who forwarded the report to Caltrans District 12 (Orange County). Likewise, Chino Hills City staff submitted the report to Caltrans District 8 for their review.

The Initial Study - Phase 1 (PDF) identified several tasks for the follow-up study (Phase 2). This initial study was presented to the Public Works Commission on May 3, 2017, at which time the Commission received and filed the report and supported staff’s efforts to develop a scope of work for a Phase 2 study, with an emphasis on large-truck traffic and traffic flow/safety issues along Carbon Canyon Road.

On February 27, 2018, the City hired Iteris, Inc. (Iteris) to perform the second phase of this study. This phase focuses on the large truck traffic issues and also proposes short and long term improvements to overcome some of the traffic and safety challenges in the Carbon Canyon corridor.

Iteris completed a draft of the second phase study report in October of 2018 and the report received support from the City of Brea’s staff. On January 9, 2019, staff and Iteris presented the draft study to the Public Works Commission and received their support in submitting it to Caltrans. At this meeting, several residents provided input regarding the study, which will be thoroughly evaluated and considered. The full study can be accessed via Carbon Canyon Road Phase 2 Traffic Study (PDF). The January 9, 2019 presentation provides a good overview of the potential solutions and can be accessed via January 9, 2019 Presentation (PDF).

Prior to submittal to Caltrans, the Councils of both cities must adopt resolutions which request Caltrans to restrict large truck traffic from this roadway. The study and the resolutions are then submitted to Caltrans for their formal review. Once reviewed and approved, the local Caltrans Districts (Districts 8 and 12) will forward the study along with a recommendation to their Headquarters in Sacramento for final approval. This process may take several additional months, if all proceeds as desired.

On March 26, 2019, the Chino Hills City Council adopted a resolution which requests Caltrans to prohibit excessively large sized trucks from utilizing this highway. And, on June 4, 2019, the City of Brea adopted a similar resolution. Both resolutions, along with the completed study, were submitted to Caltrans on June 19, 2019. The City is driven to successfully complete this challenge and we are fortunate that Caltrans has been a supportive partner on this effort. However, the timing will continue to depend upon their review and any additional (or unforeseen) steps.