SCE to Start Construction of TRTP Project in Chino Hills

Southern California Edison has indicated that construction will start on approximately October 9, 2010 and continue through December 2011. Residents with specific questions about the construction project may contact SCE directly by calling SCE Region Manager Lydia Roman at (909) 930-8501.

September 10, 2010 - The Appellate Court denied the City's request for an injunction while the appeal is pending. The City's appeal remains active.

August 30, 2010 - City of Chino Hills filed a Petition with the California Court of Appeal 4th Appellate District Division 2 requesting an injunction staying construction on the City's property while the appeal of the property rights issue between the City and SCE is pending.

June 4, 2010 - City of Chino Hills filed an appeal of S.B. Co. Superior Court Judge's ruling that the California Public Utilities Commission (CPUC) has exclusive jurisdiction with regard to the right-of-way property rights issue between the City and SCE.

April 12, 2010 - San Bernardino Superior Court Judge Keith Davis ruled that the California Public Utilities Commission (CPUC) has exclusive jurisdiction with regard to the right-of-way property issues between the City and SCE. The right-of-way cuts through Chino Hills neighborhoods in the heart of the City and was selected by SCE as the location for Segment 8 a of the Tehachapi Renewable Transmission Project.

Oral Arguments Were Conducted by the California Public Utilities Commission on Friday, November 20, 2009 for the Tehachapi Renewable Transmission Project

"The City's team was well prepared for the Oral Arguments conducted at the California Public Utilities Commission on Friday, November 20th," said Mike Fleager, City Manager. "The proceeding allowed the parties to present their case before the full Commission, and it allowed the Commissioners to ask questions."

According to Mr. Fleager, the City was allotted 20 minutes. Notice of Final Oral Argument (PDF)

"We are absolutely fully engaged in the process and we will continue to clarify points, provide information, and answer questions in our efforts to persuade CPUC staff," said Mr. Fleager. "The questions asked and comments made by the Commissioners definitely helped clarify which topics we will focus in on as we continue to work to persuade the Commissioners to support our alternate route."

Fleager indicated that the earliest the item could be brought to the CPUC for a vote is December 3rd.

In a separate action, the CPUC's Administrative Law Judge Victoria S.Kolakowski (ALJ), the presiding officer in the TRTP proceeding, released her proposed decision on November 3rd. Read the "Proposed Decision by the ALJ" on the CPUC Website.

Below is a map of the Edison proposed route that is being opposed by the City and residents. 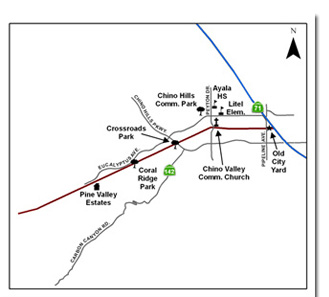 You can continue to let your voice be heard by the decision makers! The Draft EIR / EIS for Southern California Edison's Tehachapi Renewable Transmission Project has been posted on the California Public Utilities website.

List of Contacts You Can Write to for Project Input (PDF)

Sign up for E-Notify updates on the Tehachapi Renewable Transmission Project.

List of Contacts You Can Write to for Project Input (PDF)