Tres Hermanos Ranch is 2,445 acres: 1750 acres in the City of Chino Hills and 695 acres in the City of Diamond Bar. The land is located on both sides of Grand Avenue at Chino Hills' western border, and to the north extending into the City of Diamond Bar. City of Industry's Redevelopment Agency (RDA) originally bought the ranch in 1978. After the State of California dissolved RDAs in California in 2012 and required the sale of all assets, the City of Industry was approved to purchase Tres Hermanos Ranch from the RDA Successor Agency in 2017 for $41,650,000.

About the Tres Hermanos Conservation Authority

The Tres Hermanos Conservation Authority (Authority) is a joint powers agency with representatives from the cities of Chino Hills, Diamond Bar, and Industry. The purpose of the Authority is to coordinate the overall ownership, maintenance and use of the 2,445-acre Tres Hermanos Ranch property through the collaborative efforts of its Member Agencies.

The Authority Board meetings are held the third Wednesday of the month at 6:00 pm in the Windmill Community Room at Diamond Bar City Hall, 21810 Copley Drive, Diamond Bar, CA 91765.

Consistent with the Governor’s Executive Order, members of the public are encouraged to participate and address the Authority during the public comment portion of the meeting via teleconference.

Members of the Authority and limited staff may be physically present for this meeting. If you would like to attend the meeting in person, please note that face coverings are required to be worn at all times.


Joint Press Release (PDF)
In a historic effort to protect one of the largest expanses of open land in the region, the Cities of Industry, Chino Hills, and Diamond Bar announced that they have reached a settlement on six outstanding lawsuits, and will work jointly to protect the 2,445-acre Tres Hermanos Ranch located in Chino Hills and Diamond Bar.

The lawsuits, filed by Diamond Bar and Chino Hills in 2017 and 2018, sought to thwart Industry's plans to lease the property for a large solar facility.

Months of negotiations have led to a new partnership among our three cities that will benefit the entire region,  said Chino Hills Mayor Cynthia Moran. I applaud the City of Industry, and their leadership, for taking a new direction and recognizing that this beautiful natural property in the middle of our urban area is a valuable environmental asset that should be protected.

Being a regional resource is at the core of what the City of Industry is all about, like the businesses located in our city, open space also brings a greater benefit to our region,  said City of Industry Mayor Mark Radecki. With Tres Hermanos Ranch, the value is in what the land means to the people of this region, to the wildlife that use it as a corridor, and in what our communities can accomplish together to protect the special environment that has been preserved.

City of Industry's Redevelopment Agency (RDA) originally bought the ranch in 1978. After the

State of California dissolved RDAs in California in 2012, and required the sale of all assets, the City of Industry was approved to purchase Tres Hermanos Ranch from the RDA Successor Agency in 2017 for $41,650,000.

This is an incredible opportunity that truly reflects the best interest of our community and residents,  said Diamond Bar Mayor Carol Herrera.  We now have a seat at the table for Tres Hermanos and a voice to ensure it remains a valuable open space resource in our cities and region for decades to come.

The Tres Hermanos Conservation Authority is a public body with posted agendas and opportunities for public participation,  said Troy Helling, Industry City Manager.  The interests of all three Cities and our communities will be represented as discussions occur in the coming years about how best to conserve this important resource.

On October 20, 2017, the City of Chino Hills filed a legal action against City of Industry, the Successor Agency to the former Industry Redevelopment Agency, and the Oversight Board to the Successor Agency. The litigation challenges the Oversight Board's approval of the sale of Tres Hermanos to City of Industry on August 24, 2017. The City of Diamond Bar has filed a similar action.
Chino Hills Press Release 17-101 October 23, 2017 (PDF)
Diamond Bar Press Release – October 23, 2017 (PDF) 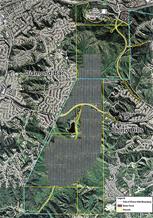 Because the City of Industry has provided no specifics regarding their proposed 450-megawatt solar facility, the City of Chino Hills developed a conceptual map to get an idea of just how much of the 2,450-acre Tres Hermanos Ranch might be covered with a solar array. The City of Chino Hills checked satellite views of solar facilities around the world to develop the map. The solar array depicted on the map covers 1,000 acres and would ONLY generate 133 megawatts. Industry's proposal is a 450-megawatt facility. This map is NOT an actual representation of what City of Industry plans, because, according to Industry, they do not have a site plan, nor any additional information about their plan.

A Solar Farm on Grand Avenue?

What is City of Industry Up To? 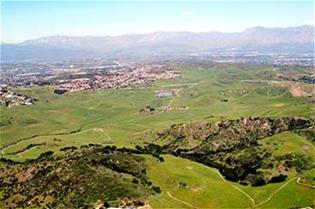 Residents and visitors alike love the beautiful view along both sides of Grand Avenue at the City of Chino Hills' western border with Diamond Bar. The area, known as the Tres Hermanos Ranch is 2,450 acres: 1,750 acres are in Chino Hills and 700 acres are in Diamond Bar. Tres Hermanos has been owned by the City of Industry's (Industry) Redevelopment Agency (RDA) since the 1970s. Industry's RDA may have been the only RDA in the State to own land outside of their City jurisdiction. The goal of redevelopment was to improve blighted property within a city's jurisdiction, not outside of the city's jurisdiction.

Activity related to Tres Hermanos has ramped up since the State of California required Redevelopment Agencies to dissolve and sell all assets. For City of Industry, that meant its RDA had to sell the Tres Hermanos Ranch. An Oversight Board, made up of taxing entities represented in the City of Industry, was appointed to oversee the process. This is also unusual because the taxing entities on the Oversight Board have nothing to do with the 1,750 acres of the land, which is located in Chino Hills; and the taxing entities that are affected by the sale are not represented in the process.

The Oversight Board approved the sale to Industry's offer to purchase the property for $41.65 million for the purpose of building a solar farm. As a point of reference, the latest appraisal for the property was $100 million, which Industry had agreed to pay. A restrictive covenant was added that would not allow the land to be used for any purpose other than open space, public use, and preservation. The covenant is meaningless however, because State law only allows a city to own property outside their boundaries for these types of public purposes anyway. Thus, the Oversight Board's reduction of the price by nearly $60 million for the covenant served no purpose. What the restrictions are, and the plan for the solar farm, are very low on specifics. Industry acts as though they are saving the region from more housing and traffic woes, and providing hiking trails and open space for people to enjoy. Yet the amount of energy they want to generate on the solar farm would seem to require solar panels on nearly the entire 2,450 acres. They've spent over $14 million dollars since March of 2016 studying the project but they say they have no design, no footprint, no specifics. According to what Chino Hills has gleaned from the project pro forma, Industry wants to generate 444 megawatts. A 1,000-acre solar project is capable of generating just 133 megawatts. Be careful of red herrings, the City of Chino Hills warns.

How Much Housing Could Be Built on Tres Hermanos?

Some worry that developers will build tens of thousands of homes on Tres Hermanos Ranch. In fact, Diamond Bar's General Plan allows 630 units. Chino Hills General Plan calls for a maximum of 675 housing units. Measure U prohibits the City from increasing residential units in the City without voter approval. Because of its unique resources, the City's General Plan requires any future development of Tres Hermanos to be master planned. Chino Hills has used a master-plan process to cluster development and protect the maximum amount of open space. For zoning purposes, Chino Hills has slated most development on the mostly-flat parcel of approximately 50 acres located on both sides of Grand Avenue to meet State affordable housing requirements. The General Plan includes 103 Very High Density units, 364 Mixed Use units, and 15 acres of commercial development allocated to the 50-acre parcel. In addition, there are 208 Agriculture Ranch units which allow one unit per 5 acres. Limited development has always been included in planning documents for Tres Hermanos: the County of San Bernardino's Chino Hills Specific Plan (1982) identified the Tres Hermanos Ranch as one of the eight Chino Hills' villages with a development potential of 358 residential units, 16 acres of commercial within a village core that also included a school and community center or library. The City's first General Plan retained the 358 residential units despite the City of Industry's request to increase the number of units to 2,600, and included the commercial area and village core area of approximately 50 acres.

It's time for residents to pay attention. There is no roadmap for a project of this nature: one city (Industry), building a solar farm (a public benefit) in another cities' jurisdiction (Chino Hills and Diamond Bar). There is very little case law to indicate the level of jurisdiction or control that the Cities of Chino Hills and Diamond Bar may exercise in reviewing a project of this nature. Is this our City's next TRTP (Tehachapi Renewable Transmission Project)? Do our residents need to decide if they are for, or against, a solar project….and take action to support their preference? Do Chino Hills residents want a massive solar farm in the City of Chino Hills which continues north into Diamond Bar? Can a massive 444-megawatt solar project, one of the largest in California, be "unobtrusive?" The Desert Sunlight solar project near Joshua Tree is a 550-megawatt project on 3,800 acres in the open desert. Would Industry's proposed solar farm consume nearly all 2,450 acres? Could this project truly protect open space and create recreation space for the public? Is a solar farm preferred over limited residential (208 agricultural ranch 5-acre lots, 467 units) and commercial (15 acres) development on property that always included some level of rights for the property owner to develop? It's time to decide. As for the City of Chino Hills, we will continue to ensure that Industry and the Oversight Board are following the law in the actions they take. We will continue to press Industry for specifics on their solar farm project. The City of Chino Hills would prefer to leave the land as open space. However, the only way for the land to remain as is, is for the landowner to agree to leave it as is. The only way the City of Chino Hills could prevent anything from happening on the land is to buy it for the apparent sale price of $41.65 million.