The following information is provided as an overview of the election process for a seat on the Chino Hills City Council.  Elections are consolidated with the Statewide General Election which is held on the first Tuesday, following the first Monday in November of even numbered years.  Terms are staggered so that three seats are available during one election cycle and two seats are available during the next cycle.  If you would like additional information or are interested in running for election, please contact the City Clerk at (909) 364-2624.

The General Municipal Election will be held on Tuesday, November 3, 2020 for the election of two (2) City Council members, one each from Districts 3 and 5 for a full terms of four (4) years each and one at-large Ballot Measure (Measure M).

The election is being consolidated with the Presidential General Election.  To view all offices up for election, please contact the San Bernardino Registrar of Voters.

Want Your Voter Information All in One Place?

Visit the San Bernardino Registrar of Voters “My Elections Gateway” online.  It has your personalized election information, from your registration info, sample ballot, drop off maps, polling places, and more.  Sign-in today and see all election information related specifically to you and even your voting record.   Visiting "My Election Gateway" will likely answer any questions you might have about this year's election.

The Registrar was unable to confirm use of many polling places used in past elections because the locations cannot accommodate COVID-19 safety precautions.  Because there are fewer polling places, the polling place locations will be open for voting for four days from Saturday, October 31 through Tuesday, November 3.  Ballot Drop-off locations will be open from Tuesday, October 6 Through Tuesday, November 3.  Links to Polling Place and Ballot Drop-off Box Locations can be found on the San Bernardino Registrar of Voters website. 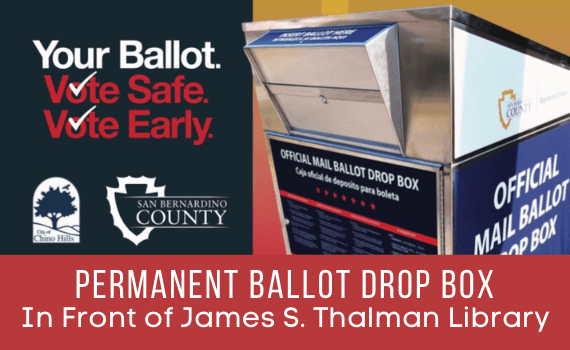 There is an official permanent and affixed Election Ballot Drop Box for mail-in ballots located in front of the James S. Thalman Chino Hills Branch Library, 14020 City Center Drive, in the City of Chino Hills. Voters can drop off their ballot to that location 24/7 from now until election day at 8:00 pm.

Sign-up at WheresMyBallot.sos.ca.gov to receive automatic email, SMS (text), or voice call notiﬁcations about your ballot.

The Nomination Period for Districts 3 and 5 began on Monday, July 13, 2020, and closed on August 7, 2020.  On August 13, 2020, the Secretary of State Alex Padilla conducted a Randomized Alphabet Drawing to determine the order that candidates' names will appear on the November 3, 2020, General Election ballots.  The following candidates qualified for the Ballot and are listed in Ballot order:

The nomination period for Write-in Candidates is now open and runs through October 20th.  Issuance of nomination papers is by appointment only.  Please contact the City Clerk's office at (909) 364-2624 to schedule.

The Chino Hills City Council has placed a measure on the November 3 Municipal Election ballot proposing to increase the Transient Occupancy Tax (TOT) 2%, from 10% to 12%.  Additional background information is available.

The City of Chino Hills has changed how Council Members are elected and switched from an at-large election system to a district-based election system.  Voters will only vote for the City Council position up for election in their specified district.  The following districts are up for election in the November 3, 2020 General Municipal Election.  Those seats are currently served by the following Council Members whose current terms are at-large.

Residents can look up their district by using an interactive map online.  Please follow these directions:

Why Did the Election System Change?

The Mexican American Legal Defense and Educational Fund (MALDEF) sent a letter to the City in August of 2016 which asserted that the City was in violation of the California Voting Rights Act of 2001 because the Latino vote was diluted, and Latino voters were prevented from electing candidates of their choice. MALDEF demanded that the City convert to a district-based election system. Cities throughout California and the United States have faced similar challenges and elections for many public agencies are changing from at-large elections to by-district elections.

A significant public process was undertaken in 2017 to provide information to the community, and to provide opportunities for public input regarding district boundaries. The City’s consultant developed four maps, and residents presented four maps, which were all reviewed at public meetings. The City Council selected a preferred map and the districts were set by   Ordinance  No. 312, which was passed and adopted at a regular meeting of the Chino Hills City Council on July 11, 2017. When the results of the 2020 Census provide new demographic data, the community will be required to review the district boundaries again.

The Office of the City Clerk

The City Clerk is the local election official and coordinates with the County of San Bernardino in the conduct of municipal elections. Duties of the elections official include: Prepare necessary resolutions calling for general and special municipal elections, Coordinate the candidate nomination process, Receipt and process of initiative, referendum, and recall petitions, and Declare election results.